Acquiring a foreign language is about building a bridge between the language we wish to learn and the language or languages which we already know, for example through an awareness of linguistic similarities and differences. That is one of the findings of the research undertaken by Associate Professor Petra Daryai-Hansen and her colleagues within the field of plurilingual education. In Denmark, more than 100 different languages are spoken, and according to Petra Daryai-Hansen, this linguistic wealth could be put to far better use in strengthening language learning in study programmes. 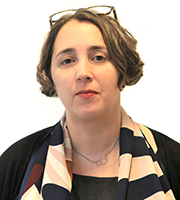 Petra Daryai-Hansen’s research is based in German Studies. She has particular focus on plurilingual eduaction, i.e. the question of how to build bridges between several foreign languages in language teaching. She is also interested in the relations between language and culture, language and content, and language and politics across the various educational levels. Her contribution to building bridges between languages has specifically resulted in a combined position: a part-time associate professorship at the University of Copenhagen and a part-time appointment as senior associate lecturer at University College UCC.

In Denmark, as in many other European countries, it has been decided politically in recent years that children must learn foreign languages earlier in their school career. The research does not provide clear results to indicate that doing so an advantage to learning. But researchers do agree that it requires teachers who are specially trained for this purpose. The children's age and linguistic resources must be taken into consideration in the development of teaching materials and the planning of teaching.

With the implementation of the Danish school reform in 2014, teachers in Danish primary and lower secondary schools began to teach English from grade 1 and German and French from grade 5. Yet already in 2012, Petra Daryai-Hansen initiated research collaboration with Randersgades School in Copenhagen on early foreign language teaching. Her research has shown that we learn foreign languages most effectively by utilising pre-existing linguistic baggage. It is a matter of building bridges between the language we wish to learn and the language or languages we already know and reflecting on similarities and differences in, for example, the languages’ structure, the meaning of the words, and the cultural conditions. We quite simply use our overall linguistic proficiency as a resource in raising our level of proficiency in foreign languages.

The Danish language policy does not, however, make it possible to harvest these potential benefits. The educational system is characterised by a strong hierarchisation of the more than 100 languages spoken in Denmark, with English and Danish at the top and migrants’ languages at the bottom of the hierarchy. Despite the research results, migrants’ languages are presented as languages that do not represent a resource, but are actually considered to be an impediment to children learning Danish.

According to Petra Daryai-Hansen, teaching foreign languages should focus far more on leveraging our existing linguistic background than is the case today. Language teachers do not have sufficient knowledge of and focus on the languages which their students already know and therefore cannot utilise the students' own resources as they learn foreign languages. For example, it would be an obvious idea to utilise Turkish-speaking pupils' native language as a shortcut to learning German in school since there are a number of similarities between German and Turkish, e.g. with regard to verb conjugation, which is an important key to understanding both languages.

According to Petra Daryai-Hansen, it is important that we develop our language skills within the three dimensions of knowledge, skills and attitudes in order to be able to interact across cultures. As a practice-oriented researcher, she develops and evaluates methodological approaches which language teachers in primary and upper secondary school can use in the classroom. The aim is for teachers to be able to strengthen the students' intercultural competences by deliberately involving the three aforementioned dimensions.

Therefore, the students should know about differences and similarities between the use of ‘De’ (polite form of the personal pronoun you) in Danish and ‘Sie’ in German. But they should also be open to other polite forms when interacting in a German context, and they should develop analytic skills that enable them to navigate specific situations.

Petra Daryai-Hansen also works with the link between language and content. Classes should strengthen the students' language awareness, but primarily focus on the content: language must be used to talk about something. The challenge is that in many cases teaching foreign languages other than English is solely limited to language instruction.

A language such as German, for example, can give access to specialist knowledge within philosophy, political history and the history of music – and thereby give alternative perspectives on the world. This is demonstrated by Petra Daryai-Hansen through her work with the Language Strategy of the University of Copenhagen.

This knowledge about the acquisition of foreign languages denotes the research backdrop for Petra Daryai-Hansen and her partners among researchers and instructors at teacher training colleges. The researchers are developing a range of didactical methods to help teachers in primary, lower secondary and upper secondary schools advance the students’ global, inter-cultural, multilingual and communicative qualifications.

Petra Daryai-Hansen is the academic head of the development project Tidligere sprogstart (Earlier language start), which works with an early language start for Danish schoolchildren in English, French and German with a specific focus on plurilingual education. The project develops innovative teaching processes for use in primary and lower secondary school. On the basis of these, she has taken the initiative for a Nordic-Baltic collaboration project for researchers, primary and lower secondary school teachers and teachers at teacher training programmes under the title of Developing Early Foreign Language Learning and Teaching in the Nordic/Baltic Context.

Petra Daryai-Hansen frequently holds workshops and gives presentations on foreign language teaching, early language start, reading skills, etc. at ministries, university colleges, primary and lower secondary schools and the Danish National Union of Upper Secondary School Teachers (GL). She participates as an expert in the German academic quality assurance work in the Danish Ministry of Education’s Agency for Education and Quality, and in GL's language thinktank, and gives recommendations as to how upper secondary school students’ language skills can be strengthened. Finally, she is taking part in a working group which is preparing new curricula in German for upper secondary education programmes.

The role of the researcher: Expert, bridge-builder, consultant, teacher

The research project Developing Early Foreign Language Learning and Teaching in the Nordic/Baltic Context. The project has 24 partners in Denmark, Norway, Sweden and Lithuania and is supported by Nordplus Horizontal

Research article in the International Journal of multilingualism, 12 (2015), p. 109-127: Pluralistic Approaches to Languages in the Curriculum.

Consortium for language and subject matter didactics in primary and lower secondary school. (in Danish)

Article in the webzine Altinget (in Danish) on 31 May 2016: Forskere: Migrantsprog diskrimineres i Danmark; by Petra Daryai-Hansen and Anne Holmen.