Library development: From collection to connection

The Future of Libraries

In recent years, the public libraries in Denmark and in many other countries have been significantly challenged by the technological development and by declining budgets. Since the arrival in the 1990s of the Internet, e-books, etc., public libraries have had to fight for their legitimacy. 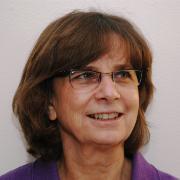 Yet there are also research-based indications that up through the 20th century, Danish public libraries have played, and still have the potential to play, a vital role in the development of civil society and in strengthening democratic culture and knowledge levels across social and cultural divides.

Local government politicians and civil servants, professional library staff, and architects engaged in converting and building new libraries, have all shared a lack of research-based knowledge of which functions physical libraries can serve in the future. Therefore, in 2010, the Danish Agency for Library and Media requested the Danish College of Library Studies (now the Royal School of Library and Information Science (IVA)) to develop a new model for the public library of the future in the knowledge and experience society. The three researchers at the Royal School of Library and Information Science undertook this work.

The result was The four-space model, which is incorporated in the report Folkebibliotekerne i vidensamfundet (Public Libraries in the Knowledge Society). The model illustrates a vision for the library and its area of activity by describing four different spaces, or universes, that the library can include; showing how the library can be developed from a passive collection of books and other media into an active meeting place to create connections between people, experiences, learning and inspiration. The four spaces overlap each other and concern both the physical and the digital library. 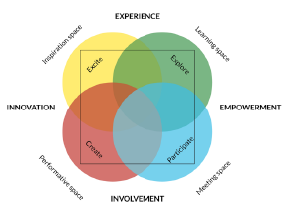 The inspiration space is based on meaningful experiences. Here, users have access to literature, art, film, music and entertainment, which will include events featuring various artists. The space should promote access to aesthetic experiences as a key component in people’s identity creation and use of culture.

The learning space is based on discovery and new learning. It includes e-learning facilities, question and answer services, lectures and access to a number of knowledge resources, which may be analogue or digital. Learning is seen as a dialogical process, which takes the user’s own experience and wishes as its starting point.

The meeting space is based on the users’ participation in, for example, meetings on local political topics, or study groups. This space also includes the facilitation of networks, since a key idea is to create a platform for people from different cultural backgrounds, and with different interests and values, to meet each other in a segmented society.

The performative space is the venue for the users’ own creative activities such as playing, recording and mixing music, editing videos and, with the professional assistance of library staff, distributing their products via social media, etc.
The model has been created on the basis of the researchers’ visits to libraries and interviews with library managers in Denmark, Norway and the USA, among other countries. The empirical material was analysed in the light of the researchers’ cultural theoretical knowledge of the role of culture institutions in the late-modern society.

With the four-space model, the researchers conceptualise functions and opportunities in the library of the future. In this way, the researchers’ work will serve as a communication tool for local politicians and library professionals when they describe the library’s potential. This conceptualisation also facilitates cooperation with other professionals in the fields of e.g. architecture and urban planning in developing the library as a placemaker, a meeting place in the urban space, with special architectural qualities and which serves as a magnet for citizens, across cultural divides.
The four-space model has been a source of inspiration for the new establishment and conversion of various libraries in Denmark. With financial support from Realdania, the Danish Agency for Culture has created a model programme to provide inspiration and knowledge to the local authorities that are about to undertake major library projects. Dorte Skot-Hansen has served as a consultant for the programme, which is structured according to the aforementioned four-space model. For example, the City of Aarhus’ new main library, DOKK1, is based on a vision that it strongly inspired by the model. The building includes a library, citizens’ services and a large number of activities for residents, focusing on innovation, creativity and technology.

In numerous lectures on the four-space model in Denmark and abroad, Dorte Skot-Hansen and her colleagues, associate professors Casper Hvenegaard Rasmussen and Henrik Jochumsen, have influenced the library development work. The model has also been disseminated all over the world via library conferences and networks, and in Sweden, for example, it is now called “the Danish model”.

Folkebibliotekerne i vidensamfundet. (Public Libraries in
the Knowledge Society.) Report from the Danish Agency
for Culture, 2010 (in Danish):

The four spaces – A new model for the public library