Learning from History: Analysis of the Past as the Key to Understanding Present-Day International Crises

In order to better understand current political or military conflicts in Europe and elsewhere in the world, we must seek to understand similar conflicts in the past. For example, access to key archives in both East and West now provides ample opportunity to analyze the Cold War. It also improves our insight into current situations, as well as into what motivates the decision-makers’ thinking, attitudes and actions. The outcome is a better basis for understanding political opponents and making rational decisions. 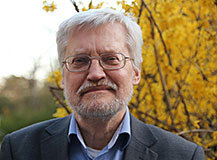 For Poul Villaume, the work of improving historical awareness is a strong driving force. As a specialist in the Cold War, which dominated European events from the end of World War II in 1945 until the fall of the Berlin Wall in 1989, he believes that understanding the situations and motivations of the different sides during this period is crucial to preventing and managing current political and military conflicts. Today, it is well documented that a genuine fear of ‘the other side’ was an important driver for decision-makers in both West and East.

According to Villaume, such insights can make us more aware of the fact that both parties to a conflict adhere to their own ‘truth’. Both fight for ideals and goals that the other side would do well to understand. Understanding will not blur the distinction between dictatorship and democracy, for example, but it will help avoid unnecessary escalation of conflicts. The greater your understanding of the other party’s worldview and motives, the better the chance of mutually assured security, rather than a unilateral sense of security based on an arms race.

One topical example of this is the conflict involving Ukraine. To the Russian mind, the Russian Empire was formed in 800 AD in Kiev, now the capital of Ukraine. According to Poul Villaume, a greater awareness of this would probably have prevented NATO from naming Ukraine as a potential member. This NATO initiative, he argues, has contributed to the impasse that characterizes relations between the West and Russia in the Ukraine.

However, Russia also stokes the flames of conflict by not recognizing the understandable nervousness of its small Baltic neighbours, which is based on their historical experiences.

Similarly, Villaume has from the very beginning brought a historical perspective to the public debate on the prospect of Western military victory in the ‘War on Terror’, e.g. in Afghanistan and Iraq.

As a communicator, Poul Villaume emphasizes the importance of learning from history when sharing his insights via the mass media, in Danish upper-secondary schools (through textbooks) and, not least, by training a large number of upper-secondary-school history teachers.

He also appears regularly as an expert in debates, e.g. on DR (the Danish Broadcasting Corporation) and the Danish TV2, and he writes regular feature articles, reviews, interviews, etc. for national newspapers. Den kolde krig og Danmark (The Cold War and Denmark) (Gads Forlag, 2011), a book which Poul Villaume coedited, is used in many upper-secondary schools.

In 2015, three major international anthologies on European Cold War history, co-edited by Villaume, will be published: