Researchers from the Ephorate of Underwater Antiquities (Greek Ministry of Culture and Sports) and the University of Copenhagen are continuing to make important discoveries at Lechaion, the main harbour town of ancient Corinth. Among them structures that join the Inner and Outer Harbours, and a unique wooden bulwark that made up part of a mole flanking the entrance to the Inner Harbour.

This short movie, financed by the Carlsberg Foundation, offers a journey from the Outer Harbour into the Inner Harbour and back in time to the 5th and 6th centuries AD.

Greek and Danish archaeologists investigating Lechaion’s harbour areas are finding that the town appears to have been much more important than previously thought. In the course of three excavation seasons, they have delineated major offshore structures, a monumental entrance canal and several inland canals connecting at least four harbour basins. In total, the area is greater than 500.000 m2 – bringing it on par with other major harbour towns of the age, such as Athens’ harbours in the Piraeus and Roman Portus. 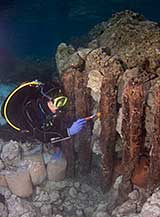 Conservator Angeliki Zisi carefully cleans and conducts a condition assessment of the bulwark’s wooden posts. Click on the image to view it in full size.

"This season topographical and geophysical surveys have made it possible for us to successfully delineate the canal zone between the inner and outer harbours. In the process we discovered that the entrance canal connecting the Inner and Outer Harbours was up to 30 m wide in the 4th and 3rd century BC, then grew narrower in later centuries. The precise reason why remains to be discovered," says c o-director of the Lechaion Harbour Project Bjørn Lovén.

The team mapped the full extent of the mole flanking the eastern side of the entrance canal as far as 46 meters offshore in 1–3 meters of water. Working carefully and methodically for 35 days, divers defined the eastern side of the canal. At the harbour entrance, and interconnected with this mole, they discovered strong stone foundations, perhaps for a tower that would protect the entrance. Nearby were found two column drums. Their precise purpose remains unknown, but such drums found at other excavated Roman harbours supported porticoes on the harbour front. Future explorations promise more discoveries. “The extremely rare wooden structures we’ve found in the early stages at Lechaion give us hope that we’ll find other organic materials, such as wooden tools, furniture, wooden parts of buildings and shipwrecks – the potential is immense and it is important to stress that we almost never find organic material on land in the central Mediterranean region”, says Bjørn Lovén.

This movie, financed by the Carlsberg Foundation, offers an overview of the investigations and discoveries of the Lechaion Harbour Project in 2016.

Located on the isthmus connecting the Peloponnese and the rest of mainland Greece, Corinth and Lechaion served as a perennial nexus of land and sea routes. From an early date Lechaion’s wharves swelled with trading goods, helping Corinth to become 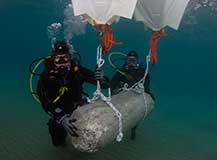 Archaeologists Konstantina Vafeiadou and Matej Školc remove a column drum from the harbour front area. Click on the image to see it full size.

fabulously wealthy. Ancient authors comment that transhipping goods at Lechaion was far preferable to sailing around the bottom of the Peloponnese, a kind of mini Cape Horn. One of them, the first-century BC author Strabo, quoted a timeworn proverb: “If you see Cape Malea [at the southeast tip of the Peloponnese], forget your home” (Fig. 2).

Throughout antiquity, Lechaion played a crucial role in supporting Corinth's function as a cultural metropolis. Beginning in the 8th century BC her waterfront saw Corinthian colonists set out for Corfu and Sicily and elsewhere as they sowed the seeds of Hellenism to the rest of southern Europe. In addition, by the Late Roman period Lechaion, while still linked with Corinth, had developed her own identity as a town and religious centre. In the 6th century AD the town showcased one of the largest Christian churches of the time, the 180-m-long Leonidas Basilica. 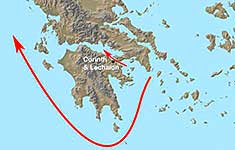 Greece, comparing the shortcut across the Corinthian Isthmus with the seaway south of the Peloponnese. (base map by ASCSA CC BY-SA 2015). Click on the map to view it full size.

The Lechaion Harbour Project was initiated in 2013 by the Danish Institute at Athens in cooperation with the University of Copenhagen and the Ephorate of Underwater Antiquities. The project is under the direction of Dr. Bjørn Lovén and Dr. Dimitris Kourkoumelis, and is aided by assistant directors Paraskevi Micha and Panagiotis Athanasopoulos.

The project wishes to thank Dr. Angeliki Simosi for our fruitful collaboration.

The work in 2013 was financed by Her Majesty the Queen Margrethe II’s Archaeological Foundation. The Augustinus Foundation and the Carlsberg Foundation have committed to funding the project for the duration of its five-year permit (2014-2018).