Danish archaeologist discovers the remains of ancient naval base in Athens

Marine archaeologist Bjørn Lovén from the University of Copenhagen has - with a team of Greek colleagues - discovered the remains of Athens' ancient naval base that was established in 493 BCE. The base, which was one of the Ancient World's largest structures, played a pivotal role in the defence of Ancient Greece.

With its massive harbour fortifications and ship-sheds designed to hold hundreds of war ships - the so-called triremes - the Piraeus Harbour naval base would have made for an impressive sight 2,500 years ago. Today, the remains of the naval base lie hidden under the water of the Mounichia fishing and yachting harbour, which is why it has taken archaeologist Bjørn Lovén and his team a long time to find it.

"Based on pottery and carbon-14 dating from a worked piece of wood found inside the foundations of a colonnade, we dated the ship-sheds to around 520-480 BCE, or shortly thereafter, and this means that these sheds probably housed the ships which were deployed to fight the Persian invasion forces during the famous Battle of Salamis 480 BCE. This naval battle was a pivotal event in Greek history; it is difficult to predict what would have happened if the Greek fleet had lost at Salamis, but it is clear that a Persian victory would have had immense consequences for subsequent cultural and social developments in Europe. The victory at Salamis rightly echoes through history and awakens awe and inspiration around the world today.""Some days, underwater visibility in the harbour was as low as 20 centimetres so we have had extremely poor working conditions. However, we did finally locate the remains and excavated six ship-sheds that were used to protect the Greek ships from shipworm and from drying when they were not needed on the sea. And the sheds were monumental: the foundations under the columns were 1,4 by 1,4 metres, and the sheds themselves were 7-8 metres tall and 50 metres long," says archaeologist Bjørn Lovén, who led the excavations of the naval base. Lovén continues:

The discovery of the naval base was part of the Zea Harbour Project, a major exavation of the Athenian naval facilities in Piraeus carried out 2001-2012. Read more about the project on the Carlsberg Foundation's website.

The Battle of Salamis

The Battle of Salamis was a naval battle fought between an alliance of Greek city-states under Themistocles and the Persian Empire under King Xerxes in 480 BC which resulted in a decisive victory for the outnumbered Greeks. The battle was fought in the straits between the mainland and Salamis, an island in the Saronic Gulf near Athens, and marked the high-point of the second Persian invasion of Greece. Two-thirds of the ships that participated on the Greek side came from Athens - and thus the naval base which Bjørn Lovén and his team have discovered.

Bjørn Lovén has produced the film 'The Wooden Wall - an echo through time' which tells the story of the Battle of Salamis and the monumental Athenian naval bases at Piraeus: 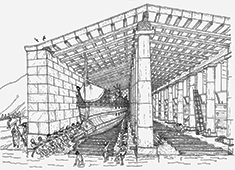 The Zea Harbour Project is led by Dr. Bjørn Loven, University of Copenhagen. The project collaborates with the Ephorate of Underwater Antiquities and the Danish Institute in Athens.