A study from the University of the Basque Country and the University of Copenhagen shows that the process of cultivation and domestication of cereals occurred at different times across southwest Asia. The analyses of plant remains from archaeological sites dated to around 11,600-10,700 years ago suggest that in regions such as Turkey, Iran and Iraq, legumes, fruits and nuts dominated the diet, whereas cereals were the preferred types of plants in Jordan, Syria, Palestine and Israel. This means that Neolithic plant-based subsistence strategies were regionally diverse and that cereals were not staple foods in all regions.

Recent archaeological studies have suggested that the cultivation of morphologically wild plant species (pre-domestication cultivation), a precursor of agriculture, developed across southwest Asia around 11,600-10,700 years ago, during the co-called Pre-Pottery Neolithic A. In a new study published in PNAS, researchers from the University of the Basque Country and the University of Copenhagen document regional diversity in the types of plant species that were exploited during this period: 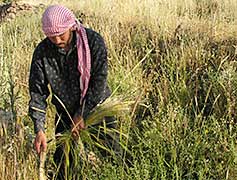 “We have studied the available archaeobotanical evidence (charred plant remains) from Pre-Pottery Neolithic sites in southwest Asia dated to approximately 11,600 to 10,700 years ago, and we can conclude that the importance we have hitherto attributed to cereals such as wheat and barley needs to be re-evaluated as other plants such as legumes – e.g. lentils, beans and peas – also played a crucial role during this time period, particularly in the eastern Fertile Crescent, e.g. Iran and Iraq, and southeast Turkey” says postdoc and archaeobotanist Amaia Arranz-Otaegui from the Centre for the Study of Early Agricultural Societies at the University of Copenhagen.

The origins of domesticated cereals

Not only did Neolithic communities from various regions across southwest Asia exploit a different range of plants – and did thus not rely exclusively on cereals – but the evidence also suggests that the different plant exploitation strategies could have contributed to important chronological dissimilarities during the emergence of morphologically domesticated species:

“Our results indicate that in the southern Levant (e.g. modern-day Jordan, Israel, Palestine and southern Syria), cereals were predominant during the Pre-Pottery Neolithic A (PPNA, 11,600-10,700 years ago) and domesticated cereals, which eventually became the cornerstones of agriculture, appeared around 10,700-10,200 years ago. But in the eastern Fertile Crescent, where cereals were not commonly exploited during the PPNA, domesticated cereals appear around 400-1000 years later. We know that plant domestication was a process that occurred in multiple regions and involved several plant species, so it is likely that in those regions where cereal exploitation was not common practice, similar management processes involving plants such as legumes could have existed” Amaia Arranz-Otaegui points out.

Arranz Otaegui conducted the study “Regional diversity on the timing for the initial appearance of cereal cultivation and domestication in southwest Asia” with colleagues from Spain (Instituto Milá i Fontanals, CSIC, Instituto Internacional de Investigaciones Prehistóricas de Cantabria) and England (University Colledge London) when she was still employed at the University of the Basque Country.