The University of Copenhagen's Department of Cross-Cultural and Regional Studies and the Research Institute of Cultural Heritage and Tourism have signed a Memorandum of Understanding that paves the road for Iranian and Danish researchers to work together on a series of heritage initiatives. As a first step, Iranian and Danish archaeologists soon launch a collaborative research project that will investigate the transition from hunting and gathering to agriculture in Iran.

Danish archaeologists, anthropologists and historians have a long research tradition in Iran, but Danish involvement in archaeological research in Iran waned in the late 1970s. Thanks to the Memorandum of Understanding that representatives from the Department of Cross-Cultural and Regional Studies and the Research Institute of Cultural Heritage and Tourism have just signed, archaeologists Peder Mortensen and Tobias Richter will soon initiate a new joint Iranian Danish archaeological project to investigate the emergence of Neolithic farming societies in the central Zagros Mountains: 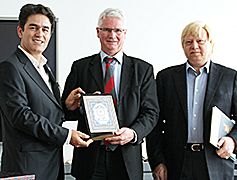 “In the past, we have collaborated with the University of Copenhagen on a number of highly successful archaeological projects, but this, unfortunately, has not been possible for a number of years. We are, therefore, very pleased to be able to resume our collaboration with such an exciting archaeological project. We hope that we will be able to establish similar collaborative projects within a wide range of academic fields.”

“Research and cooperation in the fields of culture and heritage between Denmark and other nations, such as Iran, are important building blocks in creating cultural bridges and fostering greater understanding between different societies. Although small, subjects such as Near Easter Archaeology and Persian Studies, play a pivotal role in bringing researchers and students together across borders and cultures. We are delighted to be able to host our Iranian colleagues during their visit to Denmark and to discuss with them the areas in which we can launch mutually beneficial projects in the future,” adds Ingolf Thuesen, Head of the Department of Cross-Cultural and Regional Studies.

Old excavations will be examined with new technology

The transition from hunting and gathering to food production is one of the most fundamental shifts in human history; the first civilizations that emerged in the Middle East around 7,000 years ago would not have been possible without a stable food production. The transition did not, however, happen from one day to the next. It was a long and drawn-out process which lasted thousands of years and stretched vast geographical areas.

One of those areas was the Zagros Mountains in western Iran, where hunter-gatherers gradually became more sedentary and began to grow crops in the period from 13,500 to 6,500 BC.

- The predominant theory is that agriculture began in and spread from the Levant - i.e. countries such as Syria, Jordan and Lebanon in the eastern Mediterranean. But that is probably because work has been so concentrated here. Further east, in Iran’s Zagros Mountains, there are several areas which are just as interesting when trying to understand the transition from hunting and gathering to food production, says archaeologist Tobias Richter from the University of Copenhagen.

Mortensen and Richter have secured funding from the C.L. David Foundation to support this new research collaboration with their Iranian partners. With this funding they hope to soon be able to continue work that was left partially unfinished nearly 40 years ago.

- Our aim is to create a more detailed chronology of the cultural, climatic and environmental changes the area underwent from 13,500 BC to 6,500 BC. The advent of ground-breaking scientific methodologies in the last 40 years means that we can now date and analyse the material we find, e.g. human and animal bones and plant remains, in much more detail than before. In this way, we can get an accurate picture of the hunter-gatherers’ settlement patterns and mobility, explains Tobias Richter. In these scientific analyses the team will be working closely with their colleagues at the Natural History Museum of Denmark

But research is only one side of the project. The planned excavations, surveys and analyses in the laboratory will also provide unique opportunities for Iranian and Danish students and researchers to meet and learn from each other. Danish researchers will contribute to knowledge transfer by teaching short courses in specialized research fields at Razi University in the coming years.

It is hoped that this initial project will only be the beginning of a broader collaboration in the field of archaeology and heritage between Iran and Denmark.

From 12-13 April, Professor Beheshti will be in Denmark to sign the Memorandum of  Understanding with University of Copenhagen. During his stay in Copenhagen, he can be contacted for comments about the archaeological project and collaboration at + 45 21 47 43 21 (press spokesman)