Frustrated with Al Jazeera’s coverage of the Arab Spring and the popular uprising in Syria, former Al Jazeera broadcasters and journalists established the pan-Arab satellite network Al Mayadeen in 2012 with support from Iran. The new satellite network has attracted a large audience in the Arab world, particularly among the political left who want an alternative to Islamist and Saudi Arabian dominance in the region, new research from the University of Copenhagen shows.

In 2011, when the Arab Spring spread across North Africa and the Middle East, it was the satellite network Al Jazeera which dominated the coverage. However, several of Al Jazeera’s own staff were so dissatisfied with the pro-rebel and anti-Assad bias in the coverage of the Syrian conflict that they left Al Jazeera and helped establish Iran’s new pan-Arab media network – Al Mayadeen, which is based in Beirut. 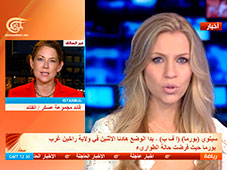 “While it is true that the genesis of Al Mayadeen is to be found in the protests against the coverage of the Arab Spring and particularly the conflicts in Syria and Bahrain, the viability and continuing appeal of the network can be attributed to more fundamental ideological conflicts in the Arab world,” University of Copenhagen researcher Christine Crone says. Crone has recently defended her PhD thesis on Al Mayadeen.

Analyses of a wide range of Al Mayadeen shows from the network’s first four years as well as interviews with the staff allow Crone to investigate the political trends that manifest themselves in Al Mayadeen’s TV shows and editorial priorities:

“The network has a strong focus on cultural affairs and allows intellectuals and artists such as the famous Egyptian feminist Nawal Saadawi to voice their opinions. Also, Al Mayadeen stands out in the Arab media world by promoting an ideal of religious pluralism and has, for instance, a weekly show about Christianity – which is unheard of in the Arab world. Many left-wing Arabs are actually secularists, but an Iran-funded television network cannot be a mouthpiece for secularism, so religious pluralism was obviously the compromise they could agree on,” Crone says and adds:

“And compromises have been made from the very beginning at Al Mayadeen: the left-wingers have had to moderate their strong democratic principles and accept Iran’s authoritarianism in the fight against Saudi Arabia; many left-wing Arabs feel homeless in a Middle East where Saudi Arabia and extreme Islamism are so dominant, and to them Iran is the progressive or pragmatic alternative to Saudi Arabia, and Bashar al-Assad is the alternative to Islamism. Al Mayadeen has become an important platform for these alternative views, even though they are often the result of compromises.”

For decades, many Arabs have dreamed about creating a pan-Arabian society in which all Arabs could live together under one nation. But with the current political and military conflicts in the region, this dream seems more and more unattainable, which is why the Al Mayadeen staff have opted for a different strategy:

“Al Mayadeen is collaborating with the South American TV network TeleSUR, with which they co-produce a monthly show. Their ambition is to create a media network across “the revolutionary South” in order to counter Western imperialism,” Crone explains and elaborates:

“To left-wing Arabs, a global outlook is important, and, to them, Cuba and Venezuela are based on true revolutionary uprisings that they aim at emulating – as opposed to the Arab Spring in 2011 – so collaboration with South American media makes sense. Again, they need to see an alternative to the reality media such as Al Jazeera and Al Arabiya present, which they do when Al Mayadeen produces shows with the South American left.”