University of Copenhagen and Ephorate of Underwater Antiquities archaeologists and geoarchaeologists have discovered the Roman Harbour at Lechaion – the main harbour town of ancient Corinth, Greece. The findings include well-preserved harbour structures dating back to the 1st century AD when the Romans had recolonised Corinth. The discoveries range from monuments built of 5 ton blocks to very rare, extremely well-preserved organic finds.

146 BC, the Romans defeated the Greek armies and laid Corinth to waste. Over a century would pass before Corinth was rebuilt, this time by Julius Caesar who recognized Corinth’s strategic position. In 44 BC, he named the new colony in honour of himself: Colonia Laus Iulia Corinthiensis. The resurrected city flourished in varying degrees for the rest of antiquity and beyond.

Now a team of archaeologists from University of Copenhagen and the Ephorate of Underwater Antiquities have begun to excavate the Roman remains at Lechaion, the main harbour town of ancient Corinth.

“During the 2017 excavations, the first Roman-period harbour structures at Lechaion have come to light. The mysterious island monument in the middle of Harbour Basin 3 – an area of the Inner Harbour measuring 24,500 m2 – was dated to the early 1st century AD. It was likely built as part of a Roman building program designed to help restore Corinth, just as the enormous 45 metres long, 18 metres wide and 4 metres high mole was constructed on exactly the same orientation as the mysterious island monument. Also, we identified a new roughly 40.000 m2 large harbour basin in the Outer Harbour (probably 6th century AD), another 40.000 m2 basin in the Inner Harbour dated to the mid-1st century AD , and the possible foundation for a lighthouse” reports University of Copenhagen archaeologist Bjørn Lovén  who co-directs the Lechaion Harbour Project.

“We have excavated archaeological layers where almost everything is preserved. Consider the pristine preservation of the roughly 2000-year-old wooden post (see video) and imagine how well-preserved wood and other organic materials that still lie at the bottom of this harbour,” says Bjørn Lovén.

The wooden post probably served as either a part of the foundations for the structure itself or perhaps as a bollard for mooring ships. The team also unearthed a variety of seeds, bones with cut marks, a roller from a wooden block, and fragments of worked wood. 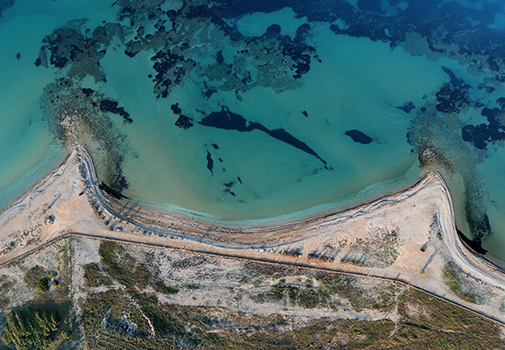 Thee two monumental moles L-M1 (left) & L-M2 (right) dominating the Outer Harbour at Lechaion. In 2017 a roughly 12 x 12 m foundation atop Mole LM-1 was identified, which belonged either to a lighthouse or a large fortification tower. Click on the image to download it in full size. Drone photo: K. Xenikakis & S. Gesafidis

“As a part of our research the Centre for GeoGenetics will extract and analyse the ancient environmental DNA from the important archaeological deposits and attempt to reconstruct the past environment genetically. Recently, they have shown that ancient DNA in deposits can identify a wide variety of organisms, everything from bacteria to plants and animals. Hence, they will characterise what lived in the area of Lechaion during the various phases of Antiquity, including the Roman period. We are discovering everything from DNA evidence to monumental moles constructed of five-ton blocks,” concludes Lovén.

The Lechaion Harbour Project was initiated in 2013 by the Danish Institute at Athens in cooperation with the University of Copenhagen and the Ephorate of Underwater Antiquities. The project is under the direction of Dr. Bjørn Lovén and Dr. Dimitris Kourkoumelis, and is aided by assistant directors Paraskevi Micha and Panagiotis Athanasopoulos. The project wishes to thank Dr. Angeliki Simosi for our fruitful collaboration.

The work in 2013 was financed by Her Majesty the Queen Margrethe II’s Archaeological Foundation. The Augustinus Foundation and the Carlsberg Foundation have committed to funding the project for the duration of its five-year permit (2014–2018). 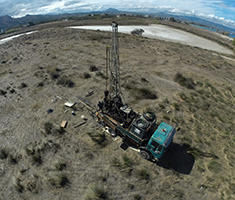 Roman coin from Corinth depicting light house (Münzkabinett der Staatlichen Museen zu Berlin Acc. 1852/9550, 177-192 AD). The team's findings include the foundation of what may have been a lighthouse. Click on the image to download it in full size.